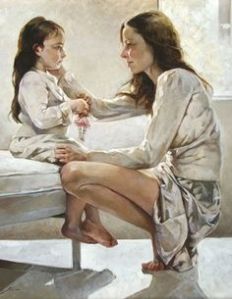 I watched a mother hold the hand of her son today.

She smiled down on him and he smiled up at her.

They walked in unison across the street.

They are not blood, but does that matter with an image such as this?

As I watched them interact-his trust, her protection-I reflected on the words from a friend of long ago:

Many times I have heard my own mother say that before she would give up one of her children, she would live under a rock with them.

While Mom loves my brother and me to the moon and back, as they say, and she means what she says, is her mentality fair?

I mean, just because you love a child more than life, your own child at that, is “living under a rock” what’s best for the child?

Recently I was drawn to NBC’s Chief Medical Editor Dr. Nancy Snyderman’s story about her unexpected, unwanted journey into motherhood.

As I watched and listened to her story, goosebumps overtook me.

Dr. Snyderman’s story, as powerful and as heartwarming as it was, made me truly, and for the first time, understand the words of my friend.

While it was painful for Dr. Snyderman’s daughter’s birth mother to give her up, I applaud her and the thousands of mothers who see a better life for their child with another mother.

And this is what I saw today.

I am reflecting on the meaning of motherhood.

I understand how one mother’s sacrifice impacts not only the child, but the woman whom he will call “Mother.”

I am reflecting on Moses’s mother, and the sacrifice she made to save her child from death. How her sacrifice not only saved her son, but also a whole nation!

Today I thank you, O God, for mothers who place their children in the arms of another.

I'm a coal miner's daughter, and proud of my Appalachian heritage. Writing and reading are my passions. I'm a barber, caregiver, loyal friend, and wife. I prefer the mountains; I love cold weather, and I adore my mini-Goldendoodle and two cats who are pretty good at hanging out with me while I write. They don't offer much advice, but they don't criticize either. And for that, I am grateful. I'm an introvert but can switch to being an extravert should the need arise. (Truthfully, I'd rather not, but don't tell anybody.) Every day I pray for guidance and strength because let's face it, meandering through life ain't easy. View all posts by hillbillycollegegirl